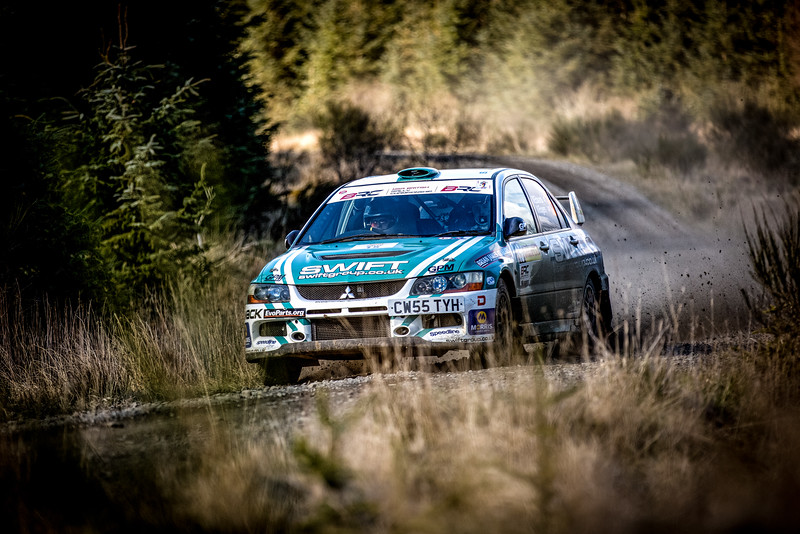 A week or so before the Pirelli Carlisle Rally a fellow photographer suggested going for something different to take photos of. It wasn't something I had really thought of doing before, but I thought why not give it a go. As it transpired I went up with a different photographer Adam. Neither of us had a clue what we were doing or what would happen. Setting off at 6.30am we headed for Kielder. After a botched shortcut later we actually found Carpark "A" relatively easy. We paid our £10 and headed down a typical Forrest road. For some reason I didn't bring the Jeep that I have access to but a lowered BMW. Not the best of ideas. Before we went, Adam who has spent quite a bit of time around Kielder predicted that there was not a Carpark where I was suggesting there was. Well he was right. We basically lined up on one side of the Forrest track. But we were there and it wasn't raining so all things were looking good.

It had been my birthday a few weeks previously and I had received a thermos ﬂask for exactly this sort of trip. So I was keen to test it out. Making my coffee at 6am I wanted to regularly have a coffee to test the temperature as much as when I needed a refreshment. So as soon as I arrived a tested it and after 2 hours 30 mins it was still steaming. So looking good.

It quickly transpired that this Rally spectating was a serious business which we were clearly novices that stood out. I may have had a new ﬂask. Others had camping stoves and seats. The air was ﬁlled with terminology and phrases related to these cars that we didn't have a clue about. Any way trying to look like we knew what we were doing we followed the crowds and spectator signs to a nice bend on the track.

Realising that even though I thought we were in good time the serious pro photographers were already camped out in the prime locations. We headed to a spot that we deemed to be a good spot. We didn't have to wait long until a 4x4 came along the track, apparently these safety vehicles do a few checks before hand. This let us grab a few shots to conﬁrm we would get a good framing when the cars came.

The spectator area we were in gradually got busier as the time ticked towards the start time. Soon a Mitsubishi Evo came racing through, a lot faster than the safety car, this we soon learned was another safety precaution. Worryingly my shots of this were blurred.

Basically the format of the day we then discovered was that in the morning there was the Historical Rally with cars having to be over a certain age old. And in the afternoon there was the British Rally Championships. 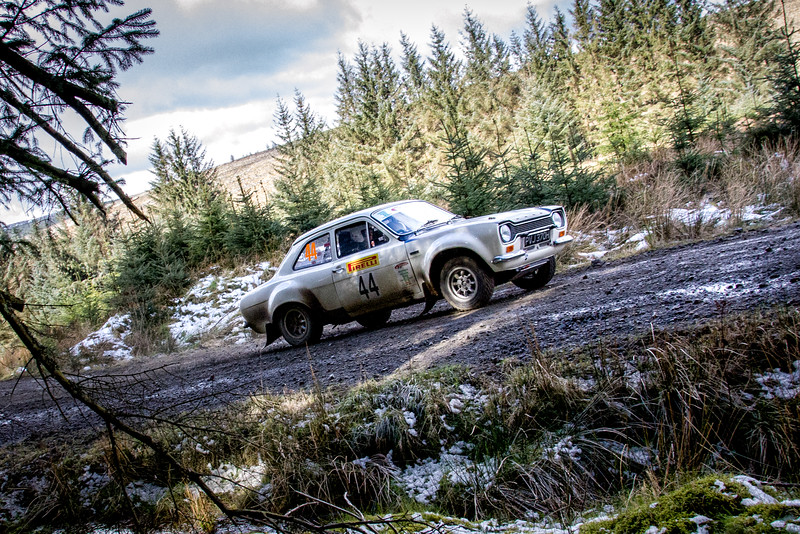 The cars soon started to come and the ﬁrst thing that struck me was the speed of them. Not surprising as this was a race. But trying to track the cars through the lens and get sharp images was clearly a mastered skill.

Just trying to get the images sharp in the beginning I wasn't really thinking of the overall composition of the images. I didn't realise this at the time because the cars were coming at such a short interval there wasn't really time for an image review. I think if I came back spending time looking at the images even at the cost of missing a few cars might have been a better idea. 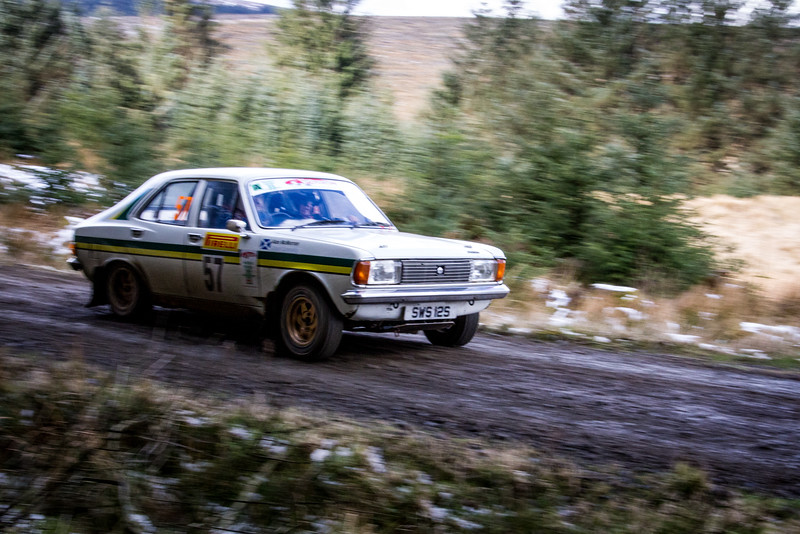 We started noticing people heading for another location outside of the spectator designated area. It was further from the action but seemed to offer a long shot of cars as they came over a hill and then a long stretch down to the corner we had been positioned on. This would allow a lot more time to track the cars.

At this time I decided to add a Sigma 2x teleconverter I between the 5d and the 70-200. Thus making it a 140-400. I bought this several years ago when I was photographing rugby quite regularly but hadn't really used it since. Getting that tight into the cars I was quite happy with some of the shots I was starting to get now. It was amazing to think of how old some of these cars actually were.

I decided to move against the grain of sports photography which is you should ﬁll the frame. Grabbing a couple of wide shots to take in the beautiful landscape that the rally was set in. I am glad I did this as it has created one of my favourite images of the day.

Next we went back down to where we had been originally to have another go. Getting the hang of the speed a bit now made judging the panning of the camera and when to press the shutter. I started to consider the composition a little bit more instead of just getting the car sharp.

The next thing I tried to do was lowering the shutter speed a lot and trying to really get some motion blur going. Maybe I jumped to this too quickly as this is deﬁnitely another art to master as well. Especially when shooting through the trees and the camera was jumping focus about.

What seemed like half an hour or so turned out to be nearly 2 hours when the last car passed us. We headed back to the car to take stock of what we were going to do next and importantly test the temperature of the coffee in the ﬂask. Still steaming. We looked at the various maps and decided to watch the British Rally Championship cars from a different location. Although very happy with where we were we thought getting some different looking images would be the best idea.

Now that we had a better idea of the sort of location that would make a good shot we selected a Carpark at a spectator viewing point which we thought would offer us a good view but also a few options to try during the rally. We picked the last stage which meant we were going to have around 4 hours to wait. The weather was still behaving itself and having enjoyed the day so far we thought this was a good idea. We headed in search of the stage which was around 40 minutes away. After locating the stage we then went in search of somewhere to eat. As we were amateurs and didn't have our camping stoves at the ready. We found a lovely little pub in Wark called the Black Bull which ﬁlled an hour or so. Off we tracked back to the ﬁnal stage of the day.

When arriving we looked at the location and realised that we had maybe been mistaken in thinking it would be a better location. Because there were no trees close to the road the safety barrier was much further back. Presumably at the ﬁrst location spectators could be closer because the trees offered protection from the cars. So off we headed through he Forrest to a different location that would give us a nice view of the cars as they came around a bend. But also along some nice background to the shot. As we were now thinking more about the composition and other elements in our photos. 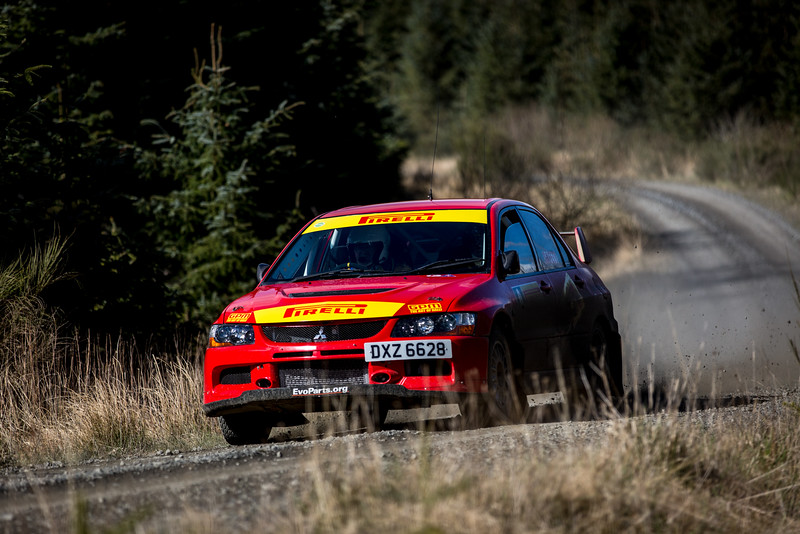 After the safety vehicles had passed we waited for the ﬁrst rally car. And boy what a difference these cars were to the morning's offerings. Firstly the noise as they approached was much louder until they went past and it was nearly deafening. Then there was the speed. When the ﬁrst car went past I didn't get a single photo as the car was coming so fast I just couldn't track it using the long lens. The next few cars were also quite a blur until my reﬂexes adjusted to the increase in speed. One interesting thing I also noticed was how larger these were in comparison the historic rally cars.

Here is an image which was a happy accident. I was actually tracking the blurred car in the distance when my camera changed focus. Here is Adam waiting for the next car I presume having missed the one that had just passed.

Although they were mainly top of the range rally cars in this section there were a few interesting vehicles passed towards the end. It seems the armed forces were trying their luck at rally driving in Defenders.

So after a long walk back to the car I had another check of the coffee and it was still warm. Exactly 12 hours after it had been made. So on that bombshell it brought to an end a really good day doing something a bit different. Thanks for reading this far. Hopefully next week I am going to put my new found skill of photographing fast things into good use as I should be trying to get some images of some birds of prey.