For my recent Birthday my mam and dad were kind enough to get me some vouchers for a company called "Going Digital" that offer Photography workshop and experience days all over the United Kingdom. These range from landscape, portraits, weddings and wildlife. After having a look at the options I decided to do a workshop titled "Hawks and Hounds" that was run by Bev Charlton set in the little village of Eggleston.

What particularly caught my eye with this workshop is that there would be a mix of birds and dogs, but more importantly the setting wasn't at the usual bird of prey centre but out in the countryside. The main difference being the lack of signs, fences, people and generally messy backgrounds that show the images to be at one of those centres. Being out in open countryside with farm buildings adds an element of realism to the photos and removes restrictions of which direction you can shoot in.

Setting off early with much the same equipment and clothing choices as the week previously when I went to the Carlisle Rally I was expecting it to be cold and wet. Whilst driving south across the Pennines and the visibility was down to 50meters or so I was glad I had the extra warm thermal socks, hat and gloves. Although I was slightly apprehensive about if we would be able to photograph the birds in the thick mist.

I need not have worried as by the time I arrived at Eggleston the conditions were clear and the temperature was beginning to rise.

After a quick hello and brieﬁng with the very friendly group we were on our way to the farm. First up was a Buzzard. I started with the longest lens combination I had which was a 70-200 f2.8 combined with a 2x teleconverter on a canon 5d mk3. David, the owner of Walworth Castle Birds of Prey, and his assistant Carol, were very easy going right from the start and they clearly had the aim of letting us get the best photographs we could. 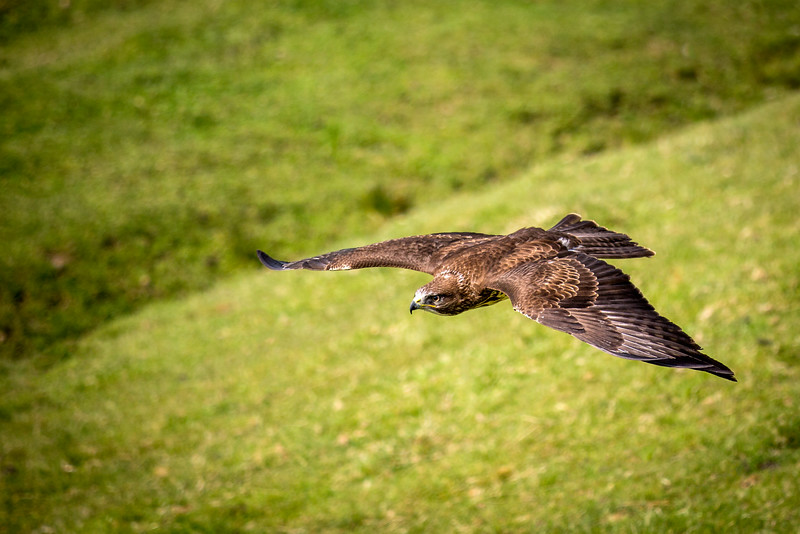 Now last week I was struggling to track a rally car. Well the Buzzard made the car look like it wasn't moving. It was so quick, and a little unpredictable to which path it would take between the two Falconers. Luckily it was a bright day so the shutter speed could be kept high. After several ﬂights I started to get into a little bit of a rhythm. I was still ﬁring off about 8-10 frames with each pass. I was glad I had a lot of memory cards.

Occasionally the Buzzard would go off and task and sit somewhere. Everybody was quick to get some of these static shots. At least it made sure you had some in focus. David kindly pointed out that this hawk was one of the biggest, but slowest birds. Meaning if it hard enough to track this hawk it wasn't going to get any easier to follow a smaller and faster bird of prey.

I really like this photo of the Buzzard sitting on this direction post for the Pennine Way. I think the decision to hold the workshop on location was made to capture images like this. You just would not get that at the actual Bird of Prey Centre where so many other workshops take place.

To help us out I think we then moved onto photographing one of the working dogs that David had brought along. Although a slower prospect than a Hawk. Rather than the spray and pray technique of shooting the birds this was more a case of getting one shot at the perfect timing when the hound came over the gate/wall. Except you couldn't really see when it was approaching, or the exact point it would come over.

We moved locations again and David brought out a Kestrel called Spuddy. A small faster bird than the Buzzard and even more unpredictable. The Kestrel was ﬂying all over the place form one vantage point to another. It made it quite difﬁcult to ﬁnd a position to stay in as better locations kept opening up.

David warned us that this particular bird often would land on people's lenses and it wasn't long before the Buzzard happily obliged.

After a morning that had FLOWN over we headed back to the village hall for lunch and an opportunity to look at the hundreds of photos that everybody had already shot. With it being so bright it was sometimes hard to see the back of the camera screen and check focus and composition. The group seemed happy with their images and David was on hand to answer a few questions about the birds.

It was soon we were back at the farm walking across a ﬁeld to a small barn so a Barn Owl called Nan could be ﬂown around a natural looking habitat. Trying to photograph a light coloured bird added another element of challenge.

I really like some of the images that use the Barn as a backdrop. We even got the opportunity to get an interior image of the Owl lit with some lovely light. 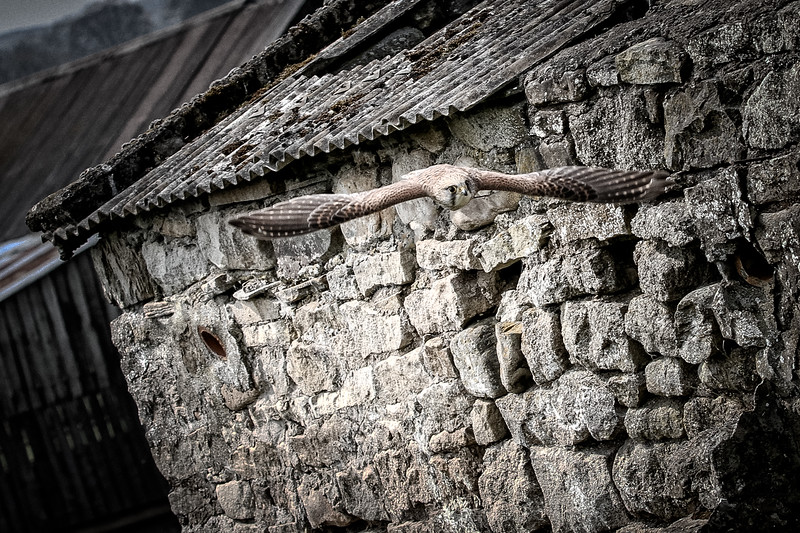 In this non stop action day we moved along to the riverbank to photograph Golden Labrador Taid chasing sticks in the river. All of the dogs were so well trained. They are deﬁnitely a credit to David and his team.

We then headed back to the farm buildings to photograph Tilly the Pointer trying to locate a rabbit in some reeds. It wasn't long before she had locked on and then froze to "Point" David in the right direction. 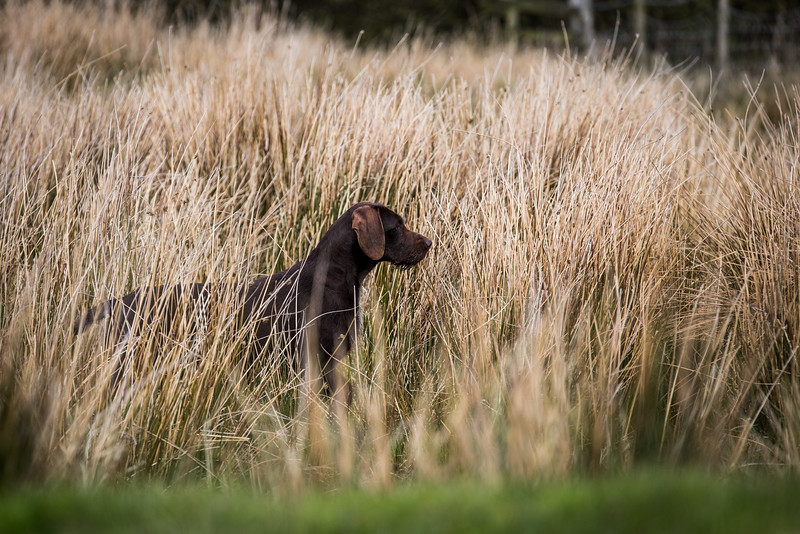 If photographing Hawks and Hounds separately wasn't hard enough the next challenge was to try and get them both together. introducing a Harris Hawk to the mix that would ﬂy over the top of Taid as he stood and watched. I wasn't expecting how close the hawk would come to the Labrador. My own dog would have tried to jump and take the bird out I think.

Something a little different was up next as two Polecat Ferrets made an appearance. They were not as fast but were quite unpredictable in where they went. Often trying to run away. Or falling of the wall they were climbing.

If the day hadn't been jam packed enough already with spectacular birds I think the best was saved for last. A Peregrine ﬂying on the top of the hill that over looked the farm. Rather then a ﬂying back and forward between falconers the Peregrine ﬂew in looping arcs around David. The speed of this bird was something else. So difﬁcult to keep your eye on never mind track with a camera. 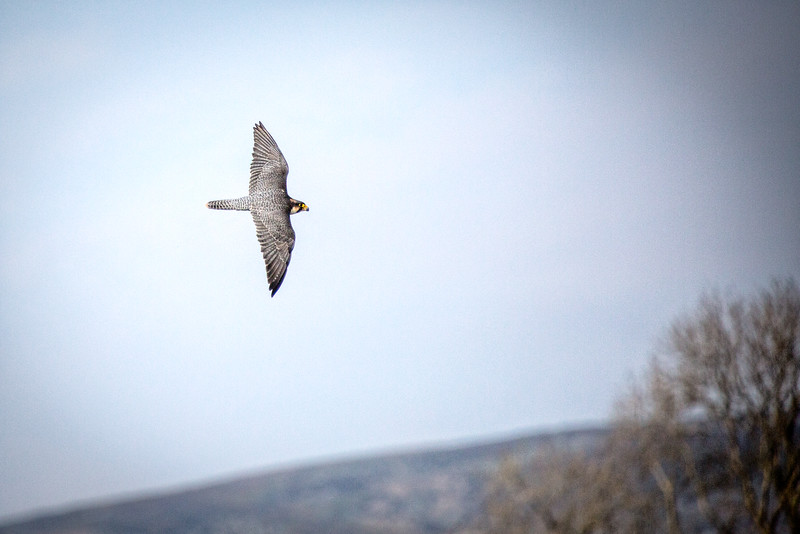 And that was the end of a terriﬁc day Photographing some fantastic animals. Thanks to Bev for running the workshop and David & Carol for being so amenable on the day going the extra mile to make sure everybody came away with some fantastic imagery. Something I would have no hesitation in recommending. For me it was something very different, just like last week's Rally Championship I was out of my comfort zone trying to photograph something new that had many different challenges to what I am normally used to.